Testing of G6PD and RDT instruments at PATH, Seattle

The Richards group at the Burnet has been developing a range of next generation G6PD assays which we hope to develop into point of care tests in the near future. One of the G6PD assays we are developing is a tube-based test which when read in the AXXIN T-8 instrument, is able to measure G6PD enzyme activity and haemoglobin densities over a 3 minute test run. We recently presented data on this assay at the Jakarta G6PD workshop and spoke to the head of PATH malaria diagnostics about testing their G6PD reagent tablets in our T-8 assay. The ACREME travel grant we received allowed for myself to spend a week in Seattle testing our T-8 prototype instrument in the PATH labs. I was accompanied on this trip by, Leanno Surrao, a PhD student in the Richards group. 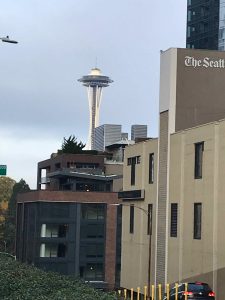 The primary objectives and outcomes of the PATH trip were as follows:

– To present to PATH the current state of the Burnet/Axxin G6PD assay development with the T-8 instrument.

Outcomes: I made a 30 minute presentation to the entire PATH malaria diagnostics team on the current state of our G6PD point of care diagnostics project. This was followed by a 30 minute Q&A session. Following this we had a break out session with senior members of the Diagnostics team to plan experiments for the remaining week.

Outcomes: We successfully tested the PATH G6PD tablet in our assay and found that it was suitable for use in our assay format. 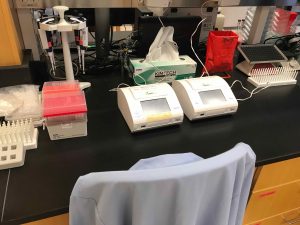 Running the AXXIN T-8 instruments in the PATH laboratories

Outcomes: We tested several PATH G6PD biobank samples and established that they were suitable for calibrating our assay for further testing. We are establishing an MTA between PATH and the Burnet to bring more biobank samples to the Burnet for future testing.

Outcomes: We observed the PATH flow cytometry test and recorded how to perform this assay at the Burnet. 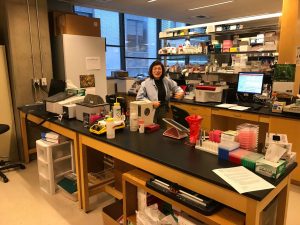 Outcomes: I performed the Point Scientific G6PD assay under the supervision of PATH laboratory staff for 10 different fresh blood samples and am now sufficiently experiences to implement this assay at the Burnet. We have ordered new Point Scientific G6PD kits. We can now use this as our reference rather than relying on hospital or pathology assays for a G6PD enzyme activity reference. This will allow us to directly communicate the efficiency and accuracy of our assays to PATH in the future. 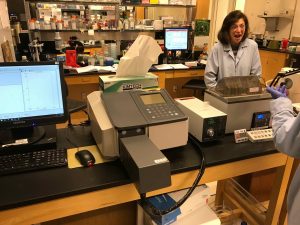