On 28-29 October the Walter and Eliza Hall Institute hosted the biennial Malaria in Melbourne conference, first held in Melbourne in 2009. As far as academic conferences go, ‘Malaria in Melbourne’ is quite unusually because it is largely geared towards students, postdoctoral researchers, and research assistants, rather than established principal investigators, or “lab heads” who are encouraged to attend, but discouraged from submitting abstracts, and thus presenting. This makes for a relaxed, nurturing environment where those still establishing their career can hone their presentation skills and develop collaborations. Interestingly, it also means that the data presented at the conference is far more likely to truly be “cutting edge” and fresh, rather than previously published and recycled.

One important exception to the “no lab heads” rule was the outstanding plenary presentation given by Audrey Odom John from the Children’s Hospital of Philadelphia. Dr John discussed the current need for novel non-invasive approaches to malaria diagnosis, and how volatile metabolites produced in the breath of those infected with malaria parasites might be harnessed to develop new diagnostic tests, without the need for a blood sample.

Malaria in Melbourne was well-attended by researchers from the Australian Centre for Research Excellence in Malaria Elimination (ACREME) and provided the opportunity to showcase their work on novel approaches for the surveillance, diagnosis, and treatment of malaria. The following are some highlights: 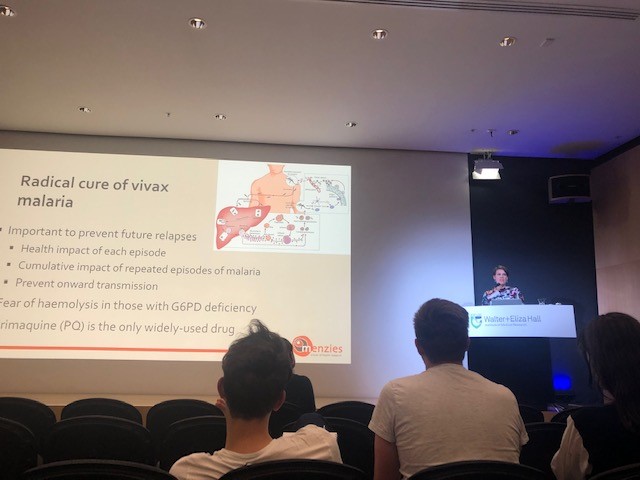 Angela Devine (Menzies School of Health Research) presented the results of cost-effectiveness analysis of quantitative G6PD testing to guide tafenoquine treatment for the radical cure of P. vivax malaria. In 2018 tafenoquine was approved by US FDA for the radical cure (prevention of relapse) of P. vivax malaria, representing the first new treatment for this form of malaria in over 60 years. Because of the risk of haemolytic anaemia in individuals who have a deficiency in the enzyme G6PD, it is necessary to test individuals for this deficiency prior to tafenoquine treatment. Understanding how best to test for G6PD treatment, and the cost involved, is critical for rolling-out this drug where it is needed most. 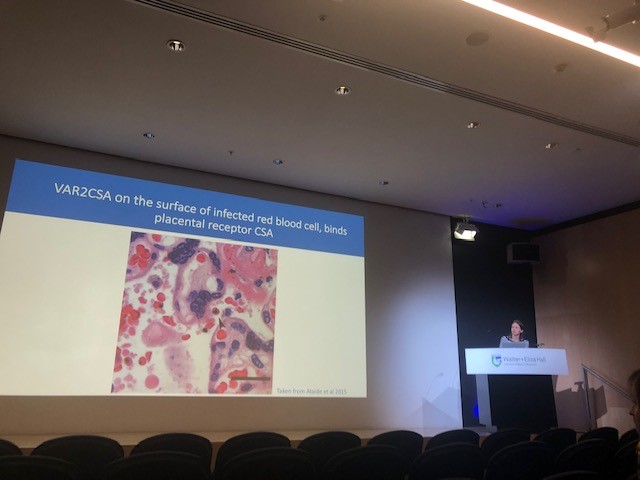 Elizabeth Aitken (University of Melbourne at the Doherty Institute) described exciting research aiming to tease-out the specific antibody responses associated with protection from placental malaria. Pregnant women, along with young children, are particularly vulnerable to malaria infection. In pregnant women, infection can lead to accumulation of parasites in the placenta, associated with increased risk of anaemia, stillbirth, and low birthweight. Understanding how women become protected from placental malaria will inform the design of vaccines to prevent the disease. 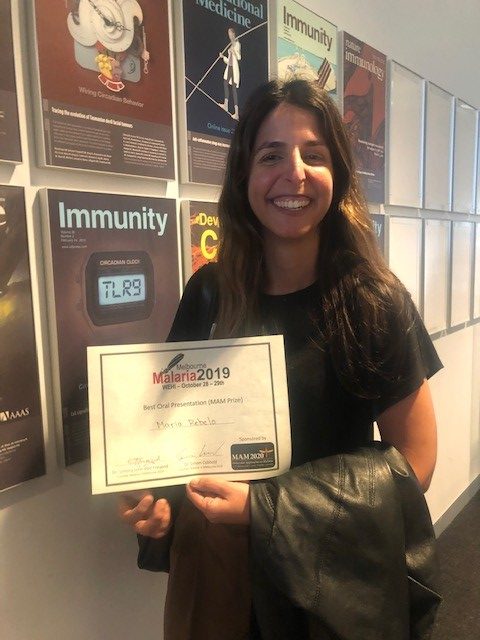 Maria Rebelo received an award for the ‘Best Oral Presentation’

Katherine O’Flaherty (Burnet Institute) presented a study of the effect of mass drug administration on immunity to malaria in Myanmar: Understanding how interventions like mass drug administration affect naturally acquired immune responses to malaria is important for determining the risk of rebound infections in a population. Ms O’Flaherty also presented on behalf of Aung Pyae Phyo, analysing trends of drug-resistance molecular markers before and after Mass Drug Administration in Myanmar. 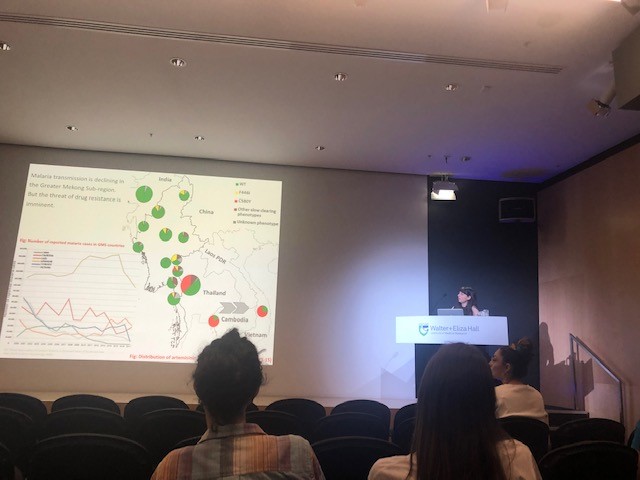 The Malaria in Melbourne conference was followed by the ACREME Annual Meeting in which ACREME researchers discussed current approaches to eliminating malaria in the Asia Pacific.