I received a travel grant from the Australian Centre of Research Excellence in Malaria Elimination (ACREME) to visit the Mathematical/Economic Modelling (MAEMOD) team lead by Professor Lisa White at the Mahidol Oxford Tropical Medicine Research Unit (MORU) in Bangkok, and one of the malaria posts in Thailand.

My visit to MAEMOD was to collaborate on models of the population level transmission of the two dominant malaria species in the region: Plasmodium falciparum and P. vivax. I worked closely with Lisa and Ricardo Aguas on the model development to capture hypothesised interactions and synchronise efforts to avoid a multiplicity of effort. The model has been drafted and the independent models implemented in python with sensitivity analyses conducted using latin hypercube sampling and the multivariate partial rank correlation coefficient based on total clinical cases. Our discussions furthered my understanding of the biology of the parasites, the historic choices of model structure, and also helped me identify more areas of the literature to focus on. I also had the opportunity to meet Pengby Ngor from the Cambodia National Center for Parasitology Entomology and Malaria Control (CNM), and have drafted a seed funding application to pursue a collaboration on the cospecies modelling.

I also visited a malaria post, a field side of the MORU Epidemiology group lead by Richard Maude. The visit substantially increased my understanding of the situation on the ground, the treatment and data collection process, and will hence improve the assumptions made during the modelling process. For example, I had not realised the houses would not be mosquito proof, or that people would sleep in their rubber plantations overnight.

In addition to the productive work side of the visit, I also managed some recreation time and activities. I joined the MAEMOD team for the end of year festivities, including making our own futuristic costumes and team robot-style dance. I saw the Grand Palace and Temple in Bangkok with one of my former office mates, and many other parks, cultural centres, and markets. 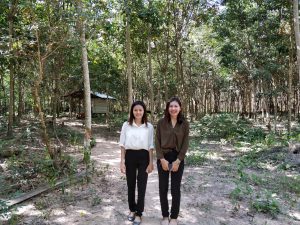 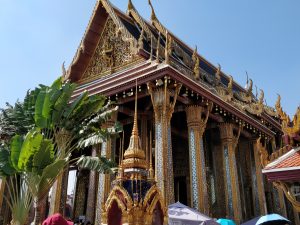