WHO recommends Mosquirix malaria vaccine for children at risk 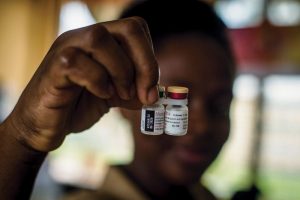 The World Health Organization (WHO) has just recommended the use of the first licensed malaria vaccine, RTS,S/AS01 or Mosquirix, for the prevention of malaria in young children in Africa. In trials in around 800,000 infants in three African countries, who received over 2.3 million doses of the vaccine, there was an estimated 39% protection against malaria illness, and, importantly, a 30% reduction in severe malaria, the form of the illness that results in death.

Each year, over 400,000 people die from malaria, over a quarter of a million of whom  are young children in Africa, the group that the RTS,S vaccine targets. Introduction of malaria vaccination, together with current strategies to prevent malaria with insecticide treated bed nets and providing easy access to high quality malaria drugs, promises to save tens of thousands of lives each year.

Two recent studies give additional cause for hope. First, in areas of highly seasonal malaria transmission, children are routinely given malaria drugs each month during the malaria season. RTS,S given before the “malaria season” was as effective at preventing malaria and malaria deaths as the drugs, and the two together decreased malaria hospitalisation and deaths by two thirds, compared to either one alone. Second, a new variant of RTS,S, called R21, showed about 75% protection against malaria in its first clinical trial. If replicated in further trials, R21 could be about twice as effective as RTS,S/AS01.

Malaria remains a major problem outside Africa as well. The Australian Centre for Research Excellence in Malaria Elimination, ACREME, led by Professor Stephen Rogerson, is working to develop better tools to prevent malaria in the Asia-Pacific region.  This includes studies of immune responses to the RTS,S/AS01 vaccine and others, and could in future involve trials of vaccines like RTS,S or R21 in our region.

“A licensed vaccine for malaria is a wonderful start. A highly effective vaccine could be a real game changer in the fight to eliminate malaria”, said Prof Rogerson